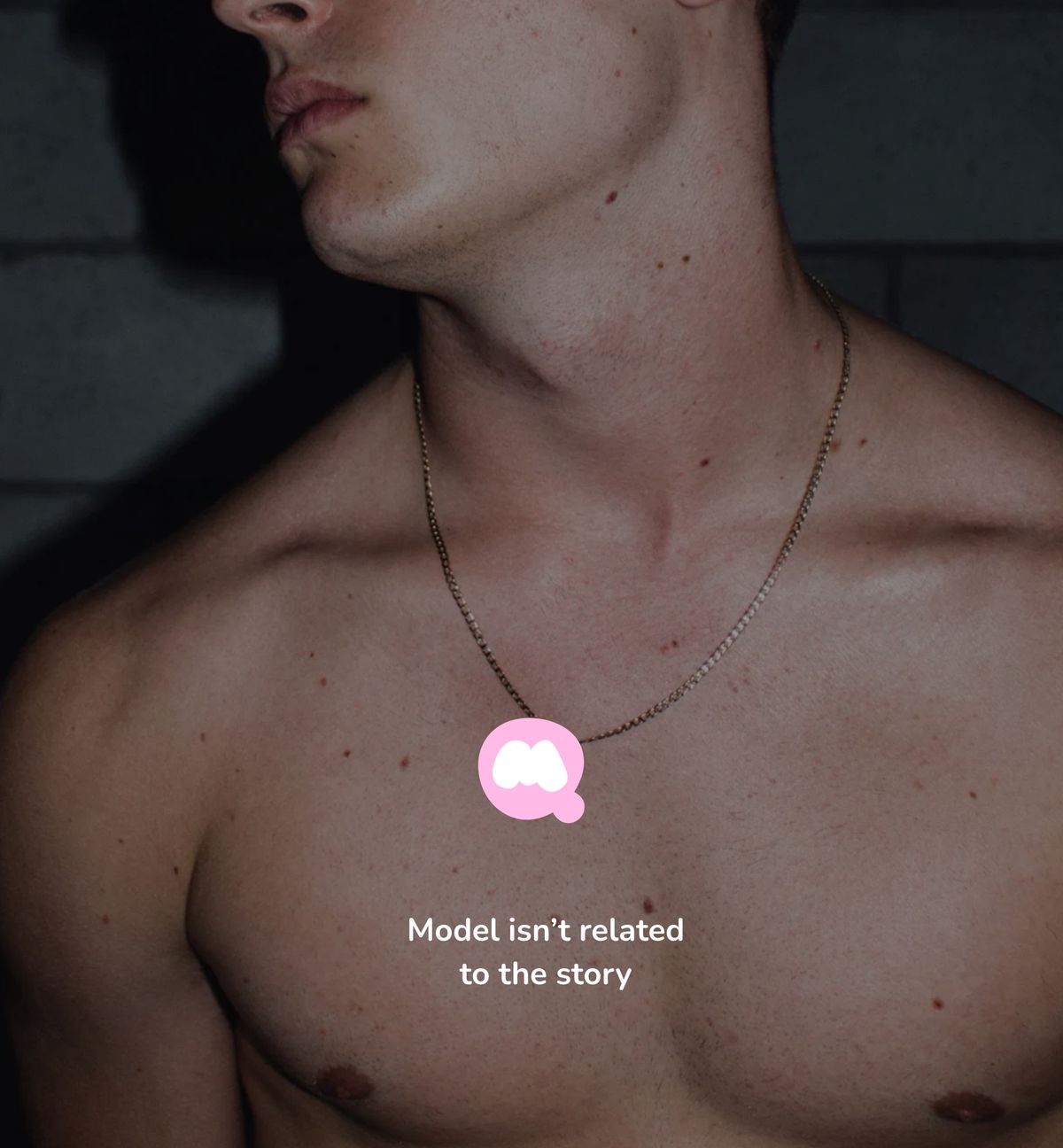 The following story was sent to my inbox anonymously through the surveys section. Do you have a story? Share it with Questionmark.

“When I arrived in Dublin, I got drunk in freedom and got addicted to my newly felt independence.

*Information on title may be inaccurate. Consult a trusted resource to learn more about contracting different HIV strains.

This was all very exciting, meeting new people, going out dancing, having a good job, paying my bills and having my own place for the first time. And can’t not mention: having a lot of sex. I had repressed many urges, and this newly found freedom gave me wings that would soon make me fly much closer to the sun.

On one of my first weekend, I invited a guy over to my place for casual sex. In the heat of the moment, we took a risk. I remember feeling a bit disgusted by myself afterwards but somehow found the risk thrilling; it wasn’t the first time anyway.

I forgot about that night very quickly and focused on my work. A Monday evening, at the end of my shift, I felt a bit sick, as if it was the start of the flu. I thought at the time it was weird to have the flu in summer. I dismissed the feeling and went home before heading to bed early; I was exhausted.

I got woken up that night with intense stomach pain, so I ran half-asleep to the toilets. I had just begun a very liquid bowel movement and suddenly started to feel really sick; I was about to throw up, and I was stuck on the toilet.

What happened next would be the equivalent of feeling squeezed like a toothpaste tube with two openings instead of one.

After a while under the shower, it seemed that my body had nothing else to give, so I went back into my room. As I was walking, I realised I had almost no balance and strength at all. I had to use the walls as support to avoid falling. My head was throbbing, my throat was on fire, and I felt extremely dizzy. I tried to fall back asleep, but my stomach didn’t let me. I went back again for some more throwing up, so I decided to go to the hospital.

As soon as I arrived, the lady at the reception asked me to take a seat. I advised of my symptoms but was turned away and asked once again to wait. There was a young couple there, and it seemed one of them was suffering from a stomach bug. I thought to myself that maybe something was going around. Five minutes later, I couldn’t bear the intensity of the symptoms, I could barely walk, and that urge to throw up was extreme, so I walked up to reception. I opened my mouth, but before I could finish my sentence, I threw up all over the counter. An immense feeling of general weakness took over, and I fell to the ground.

I heard the lady behind the counter utter a panicked “oh my god” and rush to find medical personnel to take me in. At this point, I was throwing bile up every 30 seconds; I barely had enough strength and time to breath. A nurse put a catheter in my arm and injected something saying it would stop my stomach from squeezing, and it did, but the intense urge to throw up remained.

I finally fell asleep and woke up a few minutes later with a lukewarm feeling on my right leg. I lifted my head with difficulty to try and understand where the sensation was coming from. There was also a powerful metallic smell in the air. For a split second, I wondered if my senses started to get affected by whatever was happening to me. No, my leg was drenched in blood, my own blood. The catheter tube had popped out, letting my blood out, spurting with each heartbeat.

I was way too exhausted to even panic, so I stood up, probably looking like Carrie, and started looking for a nurse.

Thankfully one passed by as I was leaving my room when I heard another “oh my god”. They hooked up another catheter in my arm, and then I finally fell asleep. I stayed the entire day, getting saline solution pumped in my arm to get back all my fluids and got sent home the same day. They did a whole lot of blood tests, and everything came back negative the first week.

For the next two weeks, I couldn’t eat anything, and drinking was also really hard. The dizziness, the throat, the head and the weakness intensified a bit. I also started to get a red rash covering different parts of my body progressively until I turned entirely red from head to toe. The rash stayed a few days and started fading away. When it did, it started itching with an intensity I had never experienced before. I tried over the counter creams to calm the itch and tablets, nothing worked. I couldn’t sleep for more than 3 hours a night for the following 10 days.

In the third week, I was absolutely drained of energy; I had lost 10 kilos in the past 7 days and was probably not looking very well. I was still waiting for the third round of blood tests. The second round had one of the tests coming back as “unclear”. I was due back in the hospital on my birthday in June for the final results.

Finally, it was time to understand what was wrong. On my side, I already had a suspicion of what it could be, but I pushed that thought away. I arrived at the hospital and got called almost straight away. I sat next to the doctor as he was looking up my file. He was very friendly, but suddenly his energy changed as my file popped up, making my stomach sink.

I was sitting nervously on the chair with my legs trembling as I was searching for some sort of reassurance in the eyes of the doctor, but I couldn’t find it. He looked like he had horrible news to deliver. The anxiety grew stronger as I was waiting for him to say something, anything. The fear took over, and I burst out, “I have HIV, don’t I?”.

He nodded, saying, “yes”. An incommensurable wave of fear took over me. It washed away almost instantly, replaced by a feeling of great peace and calm.

Indeed, “I have it, and I cannot have it another time*“, I thought. No more feeling anxious while doing STD screenings for HIV. I knew a lot about it already, so I knew that my chances of survival on treatment were equal to that of negative people.

The doctor also told me that all the symptoms I had very rarely happened. About 5% of newly infected get it this bad, and usually, most wouldn’t experience symptoms at all. I immediately asked if there was anything to be discussed and go home and back to work. The doctor wanted me to see a “psychologist”, but I refused, saying I was okay and I just wanted to go back to work. Most of my symptoms were gone, and my energy was not quite back to what it was before, but I felt good enough to go back.

The first person I called was my partner back in my country to tell him. We both cried on the phone, and he said to me, “I don’t care what you have. I love you and will always love you no matter what”. This was the first reaction I got to my 2nd coming out, a reaction of acceptance and love. In the gay community, there are a lot of different coming outs. The one to say we are gay and, in my case, my seropositivity. I believe most coming out are directly tied to the unveiling part of our identity as humans and are not only an LGBTQ+ theme.

Later, I took the courage to call back a casual partner to tell him to go and get checked, that I had just been diagnosed with HIV. I got threatened with death; he told me he would find me and kill me no matter where I go. I let you imagine what it feels like to be freshly arrived in a country and have someone tell you these things, especially by a guy that is twice your size. It turned out he was negative, and he profusely apologised for days after with many voice messages.

I also called back my first casual encounter to tell him to get checked. He turned out to be positive, but he was on the edge of having AIDS with a much more advanced condition. His immune system was almost completely gone. He probably had HIV for a while, unknowingly.

He apologised so much and started wanting to drive me anywhere or do anything I would ask of him. He was driven by crushing guilt and probably many other emotions. I told him as we were going along the Dublin coast to focus on his own recovery and reminded him there were two of us the night we took a risk. It was as much my fault as it was his. I had no negative feelings towards him; if anything, I wanted him to move on and feel better. To this date, he has now fully recovered, is in good health and has a husband.

I got on treatment a year later and became undetectable about 2 months later. I have encountered a lot of different people and situations since then. I mainly experienced overwhelming acceptance, understanding and will to know more. There were only a few instances of rejection. Sadly, these were usually pretty violent, driven by fear, ignorance or, in the case below, backward systems.”